Peace and Conflict with China 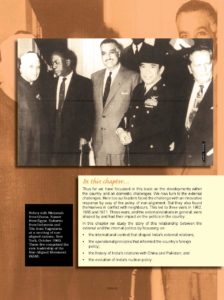 Two Aspects to be Supported:
1. India always maintained her dignity and image of a peace loving country by taking initiatives to bring about equality and understanding among the nations i.e. India supported to end Korean War in 1953, French rule in China, US role in Vietnam.
2. India’s initiatives for Non¬alignment are also appreciable for the maintenance of mutual understanding and security. During post cold war era also, NAM had become an effective tool to make the Security Council more effective and democratic.
Two Aspects to be Changed:
1. In the course of decade of 1962-72, India faced three wars and its peaceful image played a very limited role.
2. Conflict with neighbouring countries like China and Pakistan derailed India’s concept of regional co¬operation under SAARC.
Hence, India must adopt diplomatic and defensive postures in its foreign policy to maintain its independent entity.

Wars and Peace with Pakistan

1. Immediately after independence, India faced the twin challenges of Welfare and democracy. Moreover, India started participating in the world affairs as an independent nation state with the overall context like the legacy of many international disputes left by the British, pressures created by partition and poverty alleviation.

2. India was born in the backdrop of world war, hence it decided to conduct foreign relations with an aim to respect the sovereignty of other nations to achieve security through maintenance of peace. For this, India laid down directive Principles of State Policy in the Article 51 of Indian Constitution.

3. The foreign policy of a nation is the interplay of domestic and external factors. Pt. J.L. Nehru was the ‘Chief Architect of India’s Foreign Policy’ with the objectives of preserving sovereignty of India, protection of territorial integrity and promotion of rapid economic development. Hence India adopted NAM to stay away from any military blocs.

4. Nehru’s Era established the contacts between India and States in Asia and Africa by convening conferences on Asian Relations (March 1947), Indonesia’s Freedom Struggle (1949), decolonisation process, and engaged herself in Bandung Conference in 1955 .with the newly independent Asian and African Nations.

5. Panchsheel, the five principles of peaceful co-existance (29 April 1954) between India and China was a stronger step towards friendship and relations. India advocated China’s new government as a communist even in the UN after Chinese revolution in 1949 to ahead a friendly step.

6. India and China began to conflict on annexation of Tibet by China and suppressed Tibetan culture also. China claimed Aksai Chin area and NEFA within the Indian territory, which differences could not be resolved despite correspondence and discussions and led India to indulge in conflict.