1. Cuban Missile Crisis made the whole world suspecious by creating clashes between the two superpowers, the US and the USSR namely Cold War.
2. Cold War referred to competitions, tensions and series of confrontations between the super powers.
3. The end of Second World War, was also the beginning of the Cold War. The worldwar ended when the US dropped atomic bombs on Japanese cities of Hiroshima and Nagasaki in August 1945 to stop the Soviet Union from making military and political gains in Asia.
4. Both the powers became reluctant to initiate war to protect world from large scale destruction as they were aware that no political gains would justify the distruction of their societies.
5. The greed of expansion of their spheres of influence divided the world into alliances.

The US built western alliances which formalised into three organisations namely

6. The Soviet Union created Eastern alliance known as the Warsaw Pact and its principal function was to counter NATO’s forces in Europe.
7. Smaller states joined either of the alliances to get the promise of protection, weapons and economic aid against their local rivals.
8. Superpower required them to gain access to vital resources, military base to launch weapons and troops, to spy on each other and economic support.
9. Despite of occurring crisis in Korea, Vietnam and Afghanistan, both the superpowers behaved rationally and responsibly. However ,Since Cold War did not eliminate rivalries between the two alliances, mutual suspicions led them to an arms race.
10. Both the superpowers understood that war might occur in spite of restraint. To limit the destruction they decided to collaborate in limiting certain kinds of nuclear and non-nuclear weapons through ‘arms control’ by signing various treaties such as 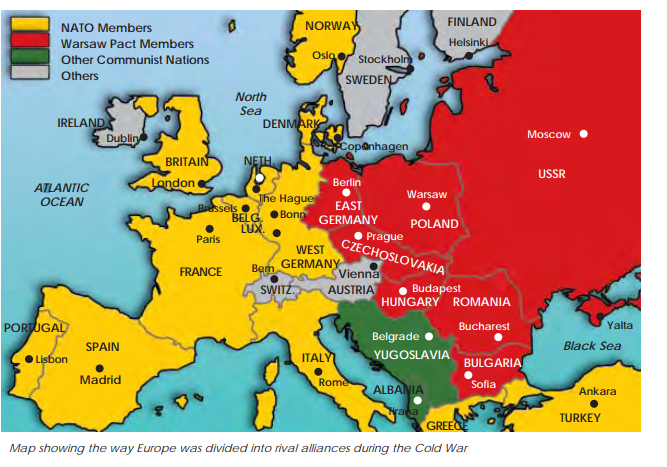 11. Countries outside the two blocs known as NAM (Non Aligned Movement), joined by decolonised countries of Asia, Africa, and Latin America, played a crucial role in reducing cold war conflicts to maintain peace and stability all over the world.
12. Five founder members of NAM were

13. The majority of NAM members were categorised as Least Developed Countries (LDCs) which initiated economic development under the head of New International Economic Order (NIEO).
14. Economic development was vital for independence of the new countries. The United Nations Conference of Trade and Development (UNCTAD) brought out a report in 1972 to propose:-

15. India responded to growth of Cold War in two fold. First, it stayed away from alliances further, it raised voice against newly decolonised countries becoming part of either the alliance.
16. NAM served India’s interests also to participate in international decisions and maintained balance between the two superpowers.
17. India’s policy was criticised on grounds of possessing contradictory postures i.e.

18. It is said that NAM has lost some of its earlier relevance after disintegration of USSR and end of cold war in 1991 both as an international movement and as the core of India’s foreign policy.
19. NAM is based on a resolve to democratise international system by thinking about a alternative world order to redress existing inequities that poor and very small countries need not to follow any of the big powers instead they can pursue an independent foreign policy also.
20. These core values make NAM relevant even in today’s scenario as it has stood against adverse circumstances and served an important purpose of protecting the interests of third world countries.